USE: discourages the overgrowth of yeast (Candida), fungi, and other unwanted organisms.

Undecylenic acid is one of the most powerful anti-yeast natural medications available. This concentrated, broad-spectrum formula combines specific natural agents useful in supporting a healthy balance of intestinal microflora, thus discouraging the overgrowth of yeast. It contains some of the most powerful anti-yeast nutritional available. Sustained release and ph balanced, this potent formula is readily absorbed.

Candida albicans is a yeast-like fungus that can be found living in the intestinal tracts of most individuals. Yeasts co-habitate along with over 400 hundred healthy bacteria in a cohesive symbiotic relationship. The healthy bacteria that inhabit the intestinal tract help with digestion and absorption of certain nutrients including vitamins and minerals. Normally, yeasts are kept in check by the good bacteria. However, over use of certain medications, including anti-biotics, birth control pills, and corticosteroids can kill the good as well as the bad bacteria.

Causes:  Prolonged antibiotic use is believed to be the most important factor in the development of chronic Candidiasis. Antibiotics suppress the immune system and the normal intestinal bacteria that prevent yeast overgrowth. There is little argument that when used appropriately antibiotics save lives. However, there is also little argument that antibiotics are seriously overused. Long term use of cortisone also contributes to yeast overgrowth. As the good bacteria population shrinks, the yeast, left unchecked begins to grow. A minor increase in intestinal yeast is usually not a problem. The body's immune defenses are strong enough to keep the yeast from over growing the intestinal tract. Mild proliferation of yeast may result in this sugar-fermenting organism infecting the mouth (thrush) or vaginal lining (vaginitis). However, if left unchallenged and yeast over growth occurs, other more sinister symptoms may appear. You see, these yeast can change into an invasive mycellial fungus with rhizoids (tentacle- like projections) that penetrate the lining of the intestinal tract. These projections can cause intestinal permeability and leak toxins across the cellular membranes. Penetration by these rhizoids and the resultant intestinal permeability, cause the disruption in the absorption of vitamins, minerals, amino acids and fatty acids. This in turn causes further nutritional deficiencies. A vicious cycle has now begun. Deficient nutrients leads to reduced immunity and further weakening of the body's defense system. Fatigue, allergies, decreased immunity, chemical sensitivities, depression, poor memory, digestive complaints are some of the symptoms associated with this illness.

Additional Info: Do not use if full-bottle shrink-wrap is broken or missing. Store in a cool, dry place, away from direct light.

Suggested Use: 1 to 6 tablets daily with food. 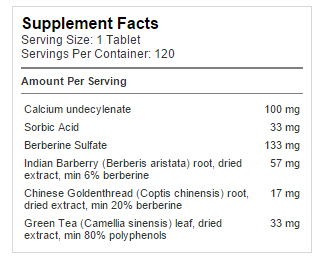